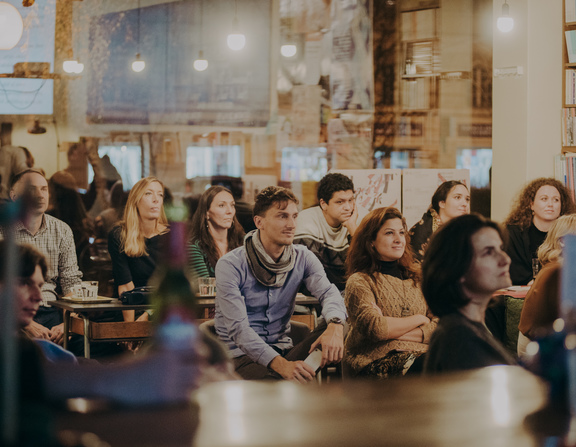 Association for promotion of cultures „Kulturtreger" was founded in 2003 with the purpose of promotion and popularization of literature and other forms of contemporary culture.

The most important programs of Kulturtreger include:

In Booksa you can also read, work, study, or meet a friend, all while sipping a cup of coffee, tea or cappuccino. But before you order a drink from our cafeteria, you have to become our member. Once you pay the annual membership fee (10 kuna), you get your Booksa membership card.

2. Booksa.hr
Kulturtreger launched its web portal for literature Booksa.hr in 2007, and ever since it has been publishing news, book reviews, editorials and literary texts on daily basis. Booksa.hr has become a reference point for literature in the Balkan region read by more than 30.000 visits per month. It is a member of Eurozine network.

3. Publishing
Together with Multimedia institute from Zagreb Kulturtreger co-curates edition "Friends” focused on theory and belles-lettres. In connection to the festival Review of Small Literatures, every year Kulturtreger publishes anthologies of contemporary writing of the less known literary landscapes.

4. Center for Documenting Independent Culture
Since 2011 in collaboration with Zagreb based organization Kurziv, Kulturtreger has been running a community archive documenting independent culture in Croatia. Springing from the anti-war movement in the 1990s and leaning on the earlier progressive cultural practices this specific segment of cultural production in Croatia has remained the most dynamic one until present. The Center documents artefacts and practices produced in the last 27 years by independent organizations, art collectives and activist initiatives, it runs an educational program for university students of archiving and museology as well as capacity building for independent organizations in Croatia and Balkan region. It is located in Booksa.

5. Civil society collaboration
The association has been active in the development of civil society in Croatia. It has established the program of presenting and hosting other cultural initiatives and organizations. Kulturtreger is a member of several national and local networks of civil society organizations involved in culture, media and youth policies.

The Association is financed by the Ministry of Culture of the Republic of Croatia, City of Zagreb, National Foundation for Civil Society Development, Foundation Kultura nova, European Cultural Foundation and European Commission.