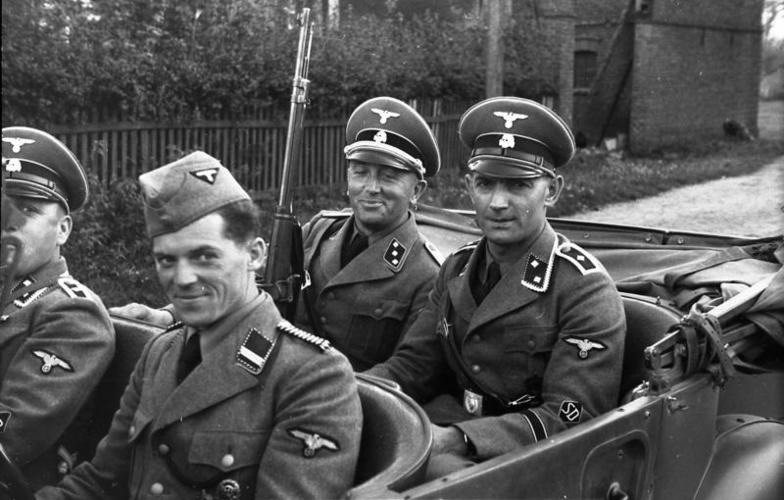 Poljska, 1939. (Foto: Bundesarchiv, Bild / Wikipedia)
A+ A-
This feature was produced in collaboration with European Center for the Study of War and Peace.

How do you deal with the loss of your entire family? How do you come to terms with the immense loss? How can a person willingly commit such atrocious acts of violence against another being? These are all questions that the narrator in David Albahari’s Götz and Meyer struggles with.
The novel, translated by Ellen Elias-Bursać, tells the story of a Jewish teacher in Belgrade who lost his family in the Holocaust. His journey began with him trying to piece together his family tree along with the stories of who they were and what happened to them. Many of his relatives found themselves as prisoners in the concentration camp known as the Fairgrounds. In a visit to the Jewish Historical Museum he first hears of two people who become his constant companions – Wilhelm Götz and Erwin Meyer.
Meyer and Götz were two German SS officers who were tasked with driving prisoners away from the Fairgrounds to Jajinci, or at least that is what the prisoners have been told. The Saurer the two were driving was a moving gas chamber and the prisoners who get in do not step out of that truck alive. Not much is known about these two men except one of them gave candy to the children in the camp. The mystery of the two men and the pain of loss drive the narrator further and further into a mental breakdown. He begins to imagine Götz and Meyer, giving one a family and the other a dream of becoming a pilot.
From the outset of the novel, Meyer and Götz become the narrator’s constant companions and at times seem as real as, if not more than, the people around him. The irony is, as he states in the beginning of the novel, "Having never seen them, I can only imagine them.” And imagine them he does. The narrator becomes stuck inside the past, or at least the past as he pictures it. He is constantly reliving the drive that Meyer and Götz took: he details the stop they would have made to redirect the exhaust into the back of the truck, and the deaths of the prisoners that occured while Götz and Meyer continued to drive the truck along.

He becomes trapped in these memories that are not quite memories and as the visions get more and more intense, it becomes harder for the narrator to separate reality from his imagination. "Memory, I said, is the only way to conquer death”, the narrator tells his students. But what are we to do when we don’t have memory to rely on? The narrator’s answer is to piece a narrative together with the help from his students and the imagined presence of Götz and Meyer.
The story is unique in that all 168 pages are written in the form of a single paragraph. Within it we read the somewhat jumbled thoughts and emotions of the narrator as we follow his spiraling downward journey into madness and possibly recovery. His fascination with Meyer and Götz draws in as his thoughts desperately try to make sense of them and the Holocaust as a whole. The writing style, following a stream of consciousness, allows the reader to become fully enveloped in the narrator’s thoughts, making his story a part of ours and allowing us to experience his pain, his fear, his confusion, desperation, anger, guilt, and his hope. The reader thus becomes a part of his madness and his memories – both real and imagined – as we get a full image of what his coping process was like.
For people like me, who were fairly removed from the actual horrors that took place during the Holocaust and the healing afterward, this novel opens up a new window into a period of time in our history that is essential for us to wrestle with. It also opens the door for discussion on how to deal with personal loss. While we may not all be directly impacted by loss on the scale of genocide, we all have to deal with death as a part of life. Albahari’s novel is an honest presentation of grief and shows us one of the ways we can choose to process and reconcile with death.
There are quite a few works of literature that deal with the Holocaust. Most of these, at least the ones I personally have read, approach the topic from the perspective of the victim. Those stories are ones of personal suffering and cost of survival under horrific and brutal conditions. Albahari’s novel does do this, but what really makes it unique is the novel’s perspective on the two SS officer’s Götz and Meyer. The narrator turns Götz and Meyer into human beings with hopes and aspirations. They are doing their job. They love their truck. They follow orders and don’t seem to hold any animosity toward the prisoners they transport and murder. This humanization of the SS by somebody who lost so much is not the story that you normally hear told. It’s even rarer to find a story where a victim relates to the perpetrator almost more than the victims that he is trying to connect to.
This is both heartwarming and heartbreaking. It is heartwarming in the sense that only when we can see the enemy as human can we begin to heal, not only internally but also as an entire nation. It is heartbreaking in that someone should be able to connect to their own relatives. They should be able to comprehend, at least in part; they should be able to relate to those that they lost. It’s a fine line to try to accomplish this and Albahari does it incredibly well. The novel can’t help but pull at your heart.
David Albahari is a Serbian Jew who was born in 1948 in Peć, Kosovo. He has traveled all over Europe, the Middle East and North America. He served as the President of the Jewish Communities of Yugoslavia in the early 1990s and helped evacuate Jewish families from Sarajevo during the early parts of the war before immigrating to Calgary in 1994. He has written numerous short stories, essay collections and award-winning novels, including Snow Man, Leeches, Shadows, Words are Something Else and Tsing, several of which have been translated into 16 other languages.
Götz and Meyer was first published in 1998, with the translation released in 2004. I can only imagine the impact that the wars in Yugoslavia (in addition to growing up in the aftermath of the Holocaust) must have had on his writing and his internal processing of the events he both lived around and the turmoil he must have faced as a child. This lends itself to the perspective presented in Götz and Meyer that is the utterly unique version of events portrayed, at times almost sympathetic to the perpetrator while simultaneously recognizing the tremendous loss and pain within the narrator. The depth of what the narrator has suffered and the way that he struggles to reconcile with that is compelling and gripping. It is hard to put this book down and will keep you enthralled far past the final page and the last sentence.

Sarah Garcia is a Californian student of International Affairs, Political Science, Theatre Arts, and Peace and Conflict. She is currently studying at the European Centre for the Study of War and Peace in Zagreb. She is an avid reader who loves the way books and poetry can transport and transform you.